The Sphinx (in Romanian: Sfinxul) is a natural rock formation in the Bucegi Natural Park which is in the Bucegi Mountains of Romania. It is located at an altitude of 2,216 meters (7,270 ft) within

the Babele (The Crones) complex of rock formations. (see more on Wikipedia – the Romanian Sphinx). The megalith got its name because of the resemblance with the Egyptian sphinx – although many say that it looks like an ancient Dac chieftain.


Around the Sphinx and the Babele rocks, many legends and paranormal theories developed over the years. Some say that the rock formations are natural, others that are artificial. There are also believes that the Sphinx from Bucegi mountains emanates positive energies that had protected the country from its enemies and there are also more modern theories that state an alien origin.

Another belief is that Atlas from the Greek Mythology is actually Omul ( The Man) peak from Bucegi mountains, that Prometheus was chained to the same mountain and the Babele are the shrines of an even older civilization that also gave shape to the Sphinx.

There is also the 2003 incident, where rumors leaked that a secret government agency in connection with the Freemasons and Illuminati discovered an underground library. That was supposed to be one of the oldest and most well-kept secrets of the humankind, a secret cave that was protected by energy barriers.

But what it is certain is that the Sphinx is a marvelous natural monument worth visiting any time of the year.

While the Sphinx and Babele rock formations keep the eyes or the traveler, little known for the average tourist are that not far from there, the Bucegi mountains are scattered with similar attractions. Go around and ask the locals about “the children of the Sphinx” – “The mushrooms”. “the snakes” “the frogs”  or other local marvels … 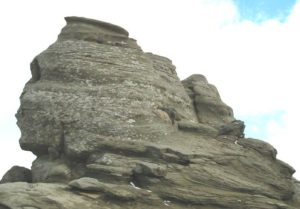 Access to The Bucegi Mountain Sphinx is pretty simple.

The most convenient way to get up there is by Busteni-Babele CableCar. It takes you at a distance of 4350 meters with level differences up to 1235meters, the trips takes about 15 minutes while you can see the beautiful Bucegi mountains.

Babele Cabin is one of the highest and best known in the area, it has a large capacity (for 108 people), The cabin is at a walking distance from the Sphinx, easy access to these sights because the entire area is a Plateau – the Bucegi Plateau.

There are no upcoming events.